If you’re looking at SE Ranking vs Ahrefs compared, you quickly notice some of the glaring differences between the two search engine optimization tools. I’ve used both of these, and I have to say that I like Ahrefs because it has so many features, but I like SE Ranking because it’s much simpler than a massive tool like Ahrefs.

92.42% of keywords get ten monthly searches or fewer, so using tools like Ahrefs or SE Ranking can help you see which ones to target. Keep in mind that you don’t always have to go after the biggest keywords to get results. When you use long tail keywords, you’ll often find that your visitors are much more targeted.

We’re going to look at the main differences as well as the similarities between SE Ranking and Ahrefs. We will also go over their features in more detail so you can see which one makes more sense for you and your business.

The main differences between SE Ranking vs Ahrefs are:

When you get into Ahrefs, it is easy to get lost in all of the options if you don’t know what you’re looking at. On the other hand, when you use SE Ranking, you might not find all the filters and features you want if you’re a more advanced user.

I know that when I started out, I liked the thought of using SE Ranking because it was much less expensive than putting the money out for Ahrefs. However, now that Ahrefs has the free version, it’s nice to be able to use it for free, even if it is limited. Despite its limits, Ahrefs is a very valuable tool even when you use the free version. However, springing for one of the plans will help you get the best results once your site is bringing in some cash. 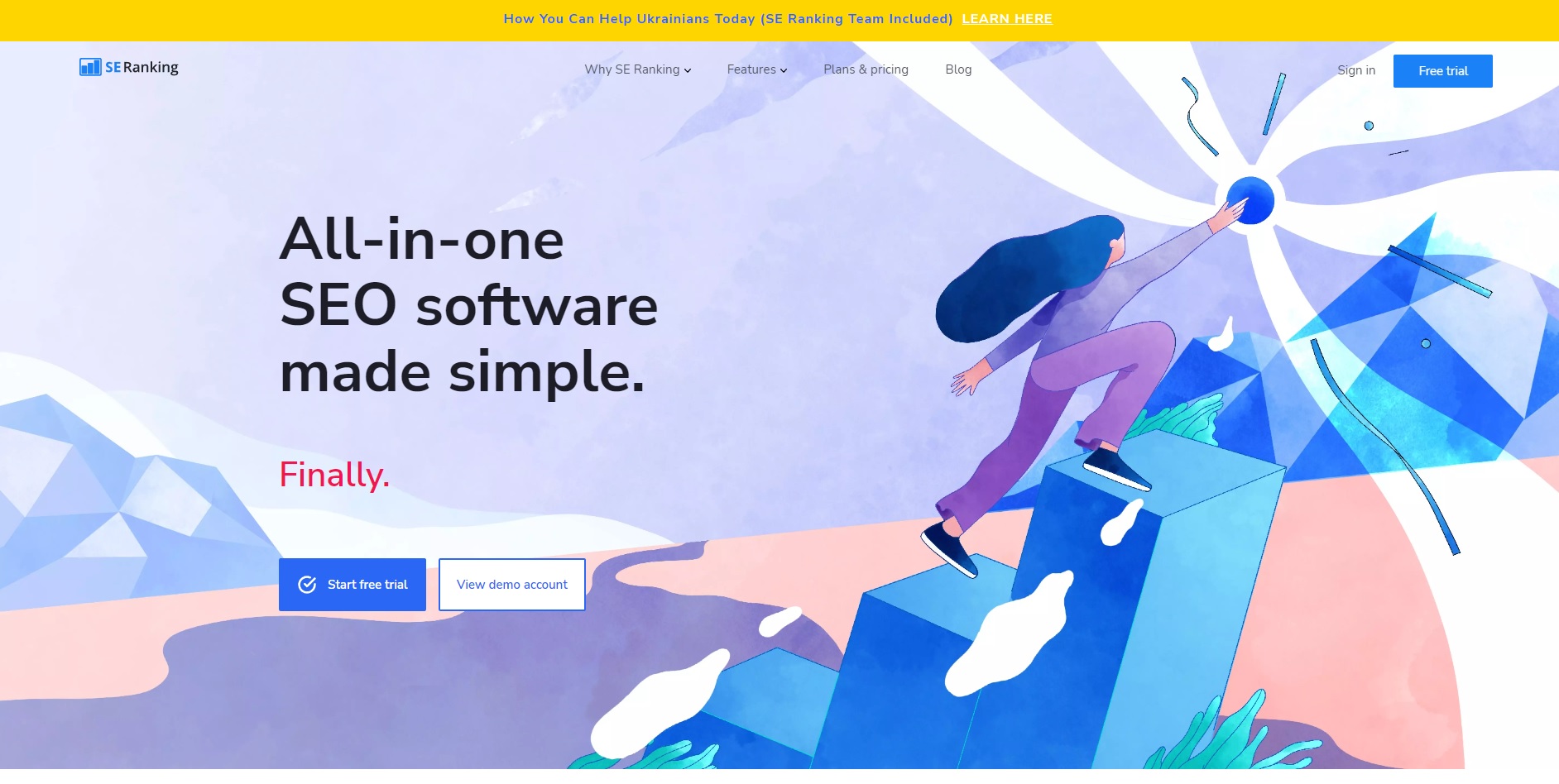 If you want an all-in-one SEO software that doesn’t make you want to pull your hair out then, SE Ranking could be the perfect one for you. SE Ranking recently expanded its Google United States database. With this new update, you can see 255 million keywords in their database.

They openly brag about their ability to give users 100% accurate keyword rank tracking. Having the ability to easily spy on your competition is a must when you want to get the jump on them and grab some of those top Google rankings for yourself.

In 2013, SE Ranking entered the scene. The cloud-based SEO platform started out in San Francisco. Its vision is to improve user experience, and functionality, and to provide support to help its users get the best results for their search engine optimization.

Unlike Ahrefs, they focus on helping beginners learn how to optimize, promote and build their website success. While non-beginners can still get a lot of value from SE Ranking, you don’t have to be an SEO genius to use their tools.

There are some key features that attract most of the SE Ranking customers that you shouldn’t miss:

The main reason you want SE Ranking is likely to start a plan for your site’s SEO. Sure, you want to monitor what’s going on, but most people want to know more about growth. How can we grow the site?

When you use SE Ranking, they make it easy to see which keywords can help you succeed. Going into the Keyword Research section of SE Ranking will help you build your keyword list and get a solid plan for how you’ll attract more people to your website through the SERPs.

SE Ranking did a great job making its user interface attractive and easy to use. The colors, charts, convenient links, small images, and overall layout give you the information you need at a glance so you can dig in and get to what you need.

The account you have does limit how many results you’ll be able to see, so keep that in mind. During the trial period, your results are very limited, but you can get a good idea of how it works and if it is something that you want to use in your business.

The less frequently you check the keywords, the lower your plan, and the longer you commit means the less you’ll pay. My advice is to start with the minimum you’d think you would need, and then you can always work your way up to what you need with a bigger or more frequently checking plan.

Top Reasons to Use SE Ranking 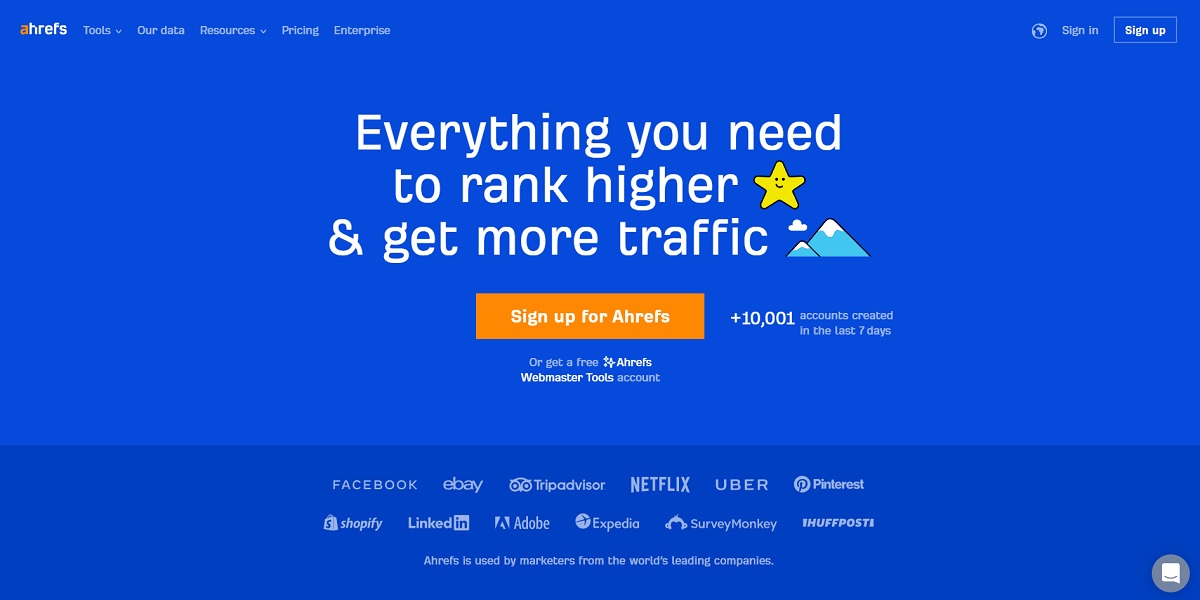 I’ve used Ahrefs on and off for years, and I think it is a great service. I’ve used it when it had a free trial, and I use it now that it has a lite offer. I only get the higher subscription when I need to do a lot of keyword research. In my opinion, it’s just not beginner friendly when it comes to the price.

Ahrefs’ founder was only 15 when he built his first document search engine, if that tells you anything about the genius behind Ahrefs. Dmitry Gerasimenko has come a long way since those early days, with Ahrefs being one of the most well-known SEO tools.

The genius of Ahrefs was in 2007, and it slowly became the Ahrefs we all know now. I like that Ahrefs isn’t a fly-by-night company, and I can depend on them to be there with all my site data histories.

Here are some of the key features you shouldn’t miss out on if you’re looking into buying Ahrefs:

Creating an SEO Plan with Ahrefs

Creating a powerful SEO plan is easy when you have all the powers of Ahrefs at your fingertips. There are a few ways that I like to use it best but my main thing is finding low-competition keywords. I really hate going after keywords I can’t rank for when I’m new. Even if I’ll rank for it later on, it’s such a pain and discouragement to see no results.

When you use Ahrefs, you can go into the keyword explorer section and get thousands of keyword ideas. If you have their keyword explorer, you will never run out of keywords to target. You can also see which ones group together so you can create content clusters easily.

You can also use Ahrefs to do gap analysis and see what topics your competition covers that you don’t cover. Just those couple of strategies can allow you to build out hundreds or even thousands of ideas for your website, and there are plenty of other strategies people use to find keywords with Ahrefs. 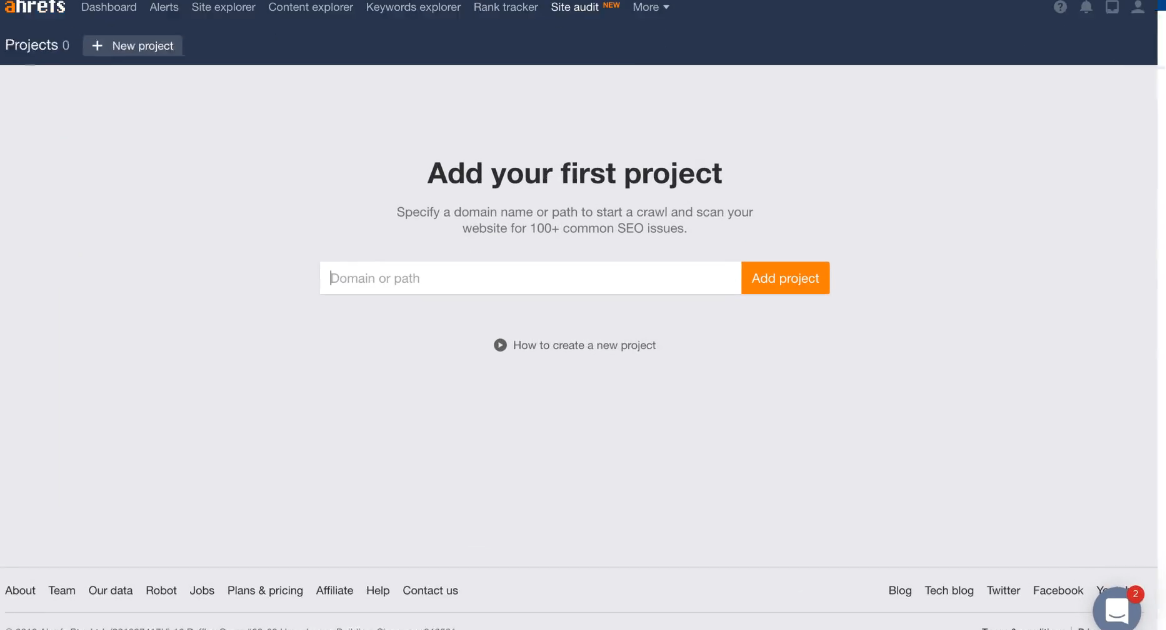 The user interface of Ahrefs isn’t as pretty as SE Ranking, but it’s easy to read and understand. The dashboard gives a nice overview pretty fast, which allows me to get an idea if things are going well or if I might need to make some changes.

I also like to go to the keyword section and see the “movement” of keywords. My goal is to have more green than red when I look at that. I also use the filter to look at how many keywords I have in the top ten.

Ahrefs used to have a free trial that would give you unlimited access to everything. However, they quickly figured out that people were gaming the system and signing up with different email addresses and stuff like that. Now there isn’t a free trial, but there is a free version. It’s pretty limited, but it gives people a good idea of what they can expect when they sign up for a premium subscription of Ahrefs.

The pricing plans for Ahrefs are as follows:

You also need to pay more for reports if you go over a certain number. This new pricing change freaked out a lot of power users because they ended up getting pretty big bills that they weren’t used to, and they didn’t notice the change.

Just be careful when you use the reports and make sure you’re under the level you chose to pay for or that you’re ready to pay the one-off fees for them.

Top Reasons to Use Ahrefs

SE Ranking vs Ahrefs – Which One Is Better?

Now that we’ve gone over both SE Ranking and Ahrefs, you might have already picked your winner. In my opinion, these are both great sites that do what they say they’re going to do. Both of them will help you with your SEO goals. However, I think they hit different people when it comes to who they help best.

If you’re a new marketer, I would say you can get away with using SE Ranking. It’s a good tool and it’s better on your budget. Just get in there, get started and start making money with your keyword research that you do have access to. Don’t get me wrong, you can go ahead and start with Ahrefs if you want but this was my path so, of course, I think that’s the best way to do things.

You might decide that you don’t think SE Ranking or Ahrefs is a good keyword research tool for you. Here are some good alternatives that might fit what you want a little better.

Ubersuggest – No, not Uber the car service. Famous marketer Neil Patel owns Ubersuggest now. I have a lifetime license with them, but of course, you need to buy more reports and stuff if you go too wild. It’s a great option, and I like supporting Neil because he’s a cool guy.

SEMRush – SEMRush is another very popular SEO tool. I’ve used it a few times, and it’s similar to Ahrefs. I don’t really think there is anything better or worse about this tool. It’s more about your personal preference. 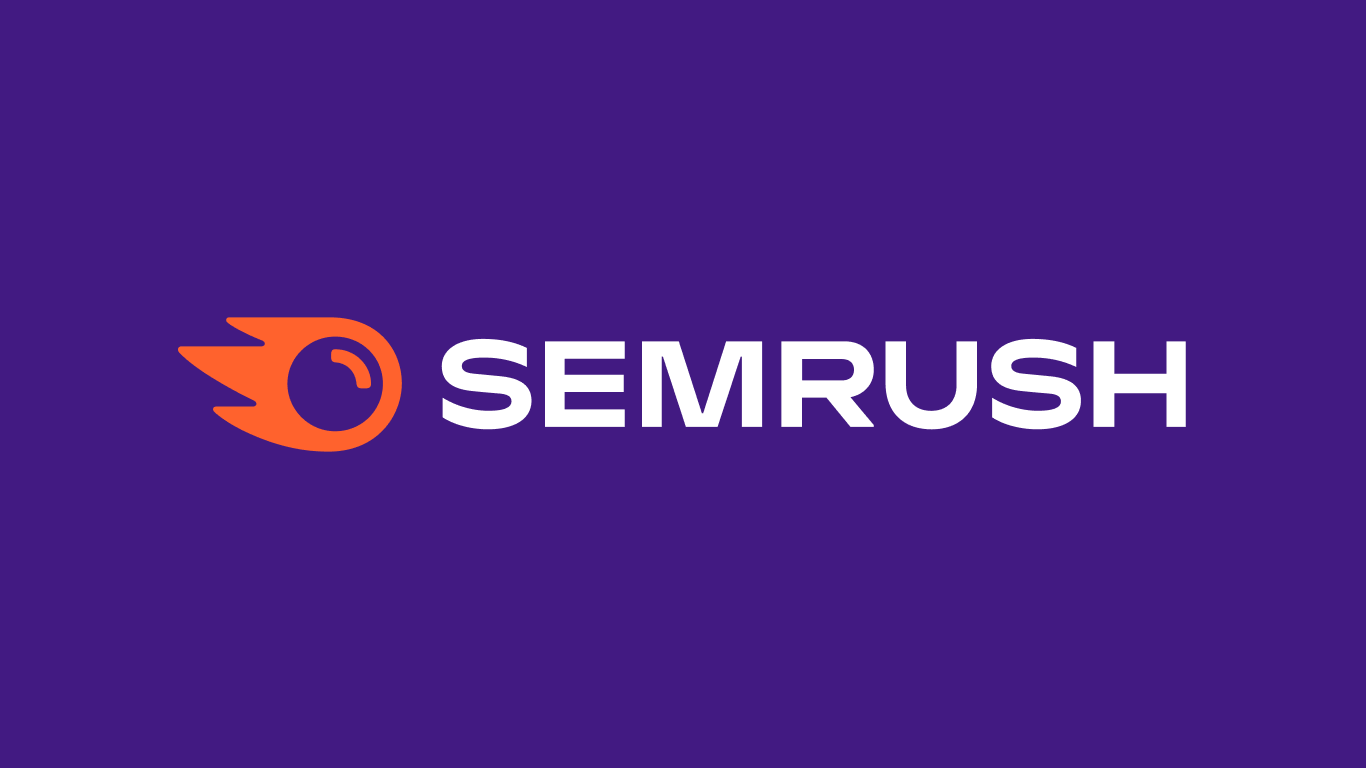 Get 14 Days of FREE SEMrush

SEMrush has generously offered our readers a double extended fully featured FREE TRIAL. Play around with the suite for 2 full weeks to see if it's what you need!

Activate FREE SEMrush
We earn a commission if you click this link and make a purchase at no additional cost to you.

Jaxxy – This is a simple tool. If you really want to get a beginner-level tool then this would be the one I would suggest. They give you a lot of different keyword ideas that you might not find in other tools. Their data that they display on the keywords is also helpful so it’s worth checking out.

Question: What is the best Ahrefs cheaper alternative?

Answer: SE Ranking is a solid and cheaper alternative to Ahrefs.

Question: Is Ahrefs worth it?

Answer: Yes. If you want to do the best keyword research possible, Ahrefs is worth it.

Question: When should I invest in an SEO tool?

Answer: The sooner you can invest in an SEO tool, the better. Doing keyword research is an essential part of website success.

The Bottomline When It Comes to SE Ranking vs Ahrefs

Now you know more about SE Ranking, Ahrefs, and SEO tools in general. If I were you, I would start out with SE Ranking if I were on a budget. If I had all the money I wanted and all the time I needed to learn, I would go with Ahrefs.

Ahrefs is a solid company, and you have the ability to learn and grow with their content as well, which is always a plus. 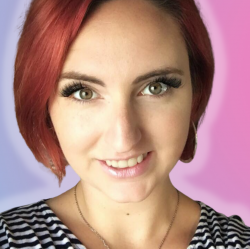